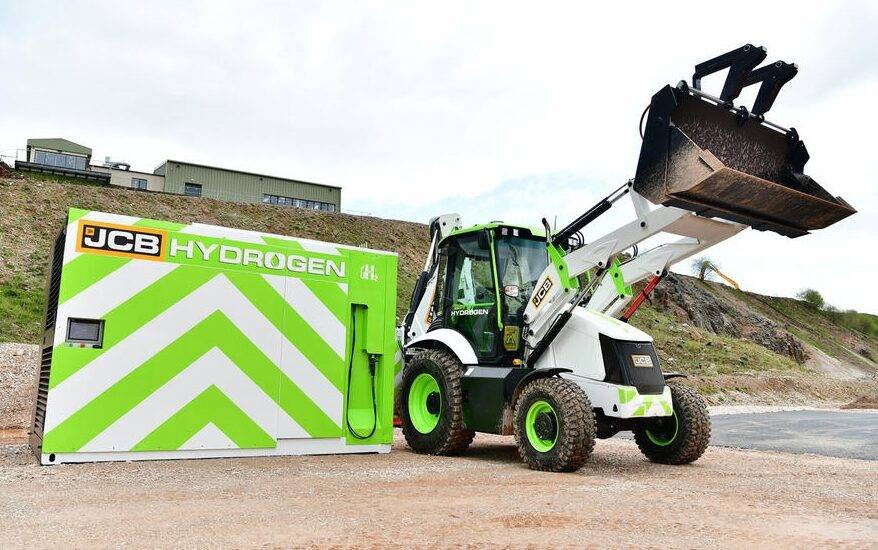 Heavy equipment maker JCB has announced a hydrogen-fueled piston engine that emits no CO2 and which it believes could help the transportation industry reach the U.K. government’s zero-emissions goal faster than any existing solutions.

JCB says its research shows the new engine, based on hardware from the JCB Dieselmax 448 four-cylinder engine but with significant modifications on top, not only produces no CO2, but also offers important advantages over battery electrics and hydrogen fuel-cell solutions. Both of which are significantly more expensive.

The JCB hydrogen engine is naturally designed for use on off-road vehicles, but after successful initial tests on excavators (which have much higher requirements for engines than cars and trucks) the company’s engineers believe they have the technology, which can be successfully applied to a much wider range of vehicles.

JCB chairman, Lord Anthony Bamford, decided to set up a hydrogen engine research team at the company’s Derbyshire research facility last July after becoming increasingly concerned about the looming loss of expertise and infrastructure for piston engines and the dissolution of a well-integrated supply chain.

He explained, “We’re not arguing about diesel anymore; that horse has run away. The goal should be no carbon emissions, but we don’t think batteries and fuel cells are the only solutions.”

Lord Bamford and his engineers believe they have more real world vision than most others in the industry because they have produced a very successful line of battery electric excavators in recent years and also have considerable hands-on experience with 20-ton prototype excavators running on hydrogen fuel cells. The main advantages of the hydrogen engine, as explained by JCB Chief Innovation Officer Tim Bernhope, are that it can be put into production quickly and affordably, while the existing know-how and infrastructure of the internal combustion engine will remain relevant.

The JCB prototype engine has a completely new intake system (reduced compression, new pistons, high-pressure Common Rail fuel system and port injection), but it is designed to match the performance and driving characteristics of existing machines.

As for toxic emissions, even the “crude” exhaust of JCB’s experimental hydrogen engine contains less NOx than a diesel engine, even with the latest additional treatment that reduces diesel pollutants by 98%.

Further measures could reduce this to what Burnhope calls “zero impact,” when the content is too small to measure. The only significant exhaust emissions from JCB’s prototype hydrogen engine that Autocar has observed in action are from steam emissions at startup.

JCB plans to refine its hydrogen engine, but is already firmly committed to production.

“We think there should be an opportunity here for people who make conventional engines to go to zero CO2 as quickly as possible, using proven technology and the existing supply base,” Bernhope said. “And if you’re concerned about climate change, speed is critical.”